Disruption of the Planes by Michael E. Thom 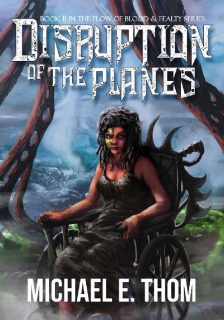 xMardamus, the King of Scion has been manipulating and creating vanguards through small connections to the world of Shiggerth and the East Realm, prearing for the invasion of his armies. However, playing with the boundaries between worlds causes larger rifts to open randomly across the land. Monsters and demons are crossing over and wreaking havoc. The stability of the world has begun to unravel, causing a disruption of the planes, a colliding of alternate universes. The Vanguards of Scion must deal with the world coming apart while they sturggle to serve the King of Scion or oppose him.

Meanwhile, Vendronia the Crone Mother of the trogs who happenes to be an orphan of an ancient shapeshifter race is offered a position in the ranks of Mardamus’s army that will likely make her the most powerful being in the East Realm and all of the world of Shiggerth.