Devil’s Dance by Michael A. Black 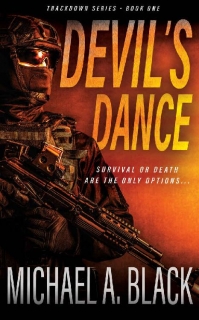 SURVIVAL OR DEATH ARE THE ONLY OPTIONS.
When Military Intelligence team Army Ranger Sergeant Steve Wolf with a Private Military Company known as the Vipers, he subsequently finds himself blamed for the deaths of some Iraqi civilians after a botched raid in Baghdad.

Upon his release from prison four years later Wolf’s friend and mentor, former Green Beret Jim McNamara, invites him into the bounty hunting business. Wolf reluctantly agrees and the pair cross paths with some undesirable characters as they head down south of the border to apprehend a wanted fugitive.

Unbeknownst to Wolf, his old enemies from Iraq, the Vipers, are also in Mexico on the trail of the same fugitive, who is in possession of a priceless stolen artifact being sought by a very rich and unscrupulous man. The trail leads them all to El Meco, the abandoned Mayan ruins, where Wolf finds himself suddenly battling alone against a small army of vicious foes.