Devil In Her Heart by Duane Lindsay 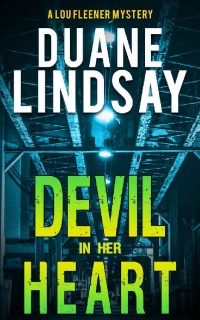 A GOOD MAN IS HARD TO KILL—
BUT SHE’S GIVING IT HER BEST SHOT.
It looked like the perfect Hollywood ending for the detecting duo that stole a million dollars from the Chicago mob—Lou Fleener, P.I., and his best buddy Monk. Lou’s blissfully married, and the brilliant but awkward Monk just made them both another million and then rode off into the sunset with the girl of his dreams…

…straight into the den of the Los Angeles mobster he beat in a poker game six months ago.
The gangster’s intent on getting his money back, with interest—i.e., everything Monk owns. But Monk’s already figured out that after he takes everything, the wise guy’s going to kill him.
However, due to his newly broken heart, he hardly cares. His new love is none other than the mobster’s daughter, sent to lure him from Chicago back to L.A. And this time Lou, the toughest street fighter in Chicago, isn’t around to protect him.

But maybe brains will get him through—Monk’s specialty is elaborate and wickedly audacious schemes. If he can stay alive, he’s got a plan to find Lou, keep the money, and get even with that…she-devil.
Or maybe get her back.
Because she couldn’t really be that bad, could she?