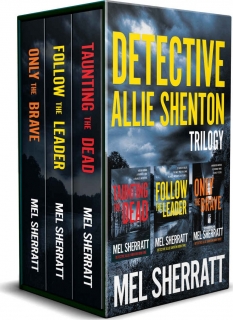 The complete Allie Shenton Trilogy in one Collection!

1. Taunting The Dead
A Dead Woman. A Powerful Man. A Fearless Detective. How far would you go to protect the ones you love? And how much further would you go to betray them? Nine out of ten murders are committed by someone the victim knows. So when Steph Ryder is found dead, DS Allie Shenton begins her investigation close to home, starting with Steph’s family and friends. Soon the lies, backtracking, and secrets multiply as each of the suspects tries to cover up their actions on that fateful night. Before long, Allie homes in on Steph’s ambitious and powerful husband, Terry. Convinced he’s hiding something, she interviews him again and again, each time seeing through his smooth charms. As the trail grows hotter, the web of deceit pulls tighter and more bodies pile up. Allie must race against time to uncover the shocking truth of who killed Steph before the suspects get away with murder.

2. Follow The Leader
To Catch A Killer, You Must Play The Game. The Rules Are Simple But Deadly. A man’s body is found on a canal towpath. In his pocket, a magnetic letter in the shape of an E. Days later, a second victim is found, this time with the letter V tucked into her clothing. As the body count rises, the eerie, childlike clues point to a pattern that sends Detective Allie Shenton and her colleagues into full alert. The race is on. Allie and the team must work quickly to determine where the killer will strike next. The rules are simple but deadly—to catch the killer, they must follow the leader.

3. Only The Brave
A Murdered Brother. A Scheming Family. A Loyalty Tested. When one of the notorious Johnson brothers is murdered and a bag of money goes missing, a deadly game of cat and mouse is set in motion. Detective Allie Shenton and her team are called in to catch the killer, but the suspects are double-crossing each other and Allie has little time to untangle the web of lies. As she delves deeper into the case, things take a personal turn when Allie realises she is being stalked by the very same person who attacked her sister seventeen years ago and left her for dead. It takes a dedicated officer to bring everyone to justice, and now she’s up against it all. Will Allie finally catch the man who haunts her nightmares, as well as the suspect she’s chasing? Or could either leave her in fear of her own life?