Den Of Snakes by Damian Vargas 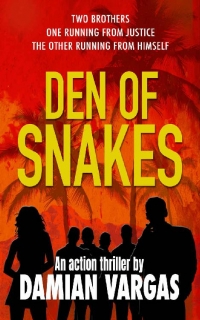 Two brothers. One running from justice. The other running from himself.
MARBELLA, SPAIN, 1985. A time of excesses, greed and deceit. A place of corruption, betrayal and violence.

Two brothers cross paths after a decade apart. Eddie Lawson – the Falklands War veteran tormented by his past and desperate for solace. Charlie, his older sibling – a villain on the run, living the high life with the rest of his crew but all too aware that the heavy hand of justice is but one misstep away.

Can the two brothers reconcile their differences and rekindle their childhood bond to save each other from a litany of threats? Or will the dark temptations of The Costa del Crime be the end of them and everyone they care about?