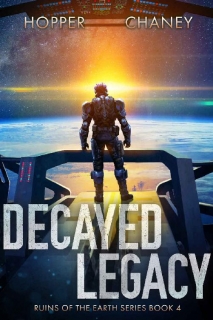 A chance to save millions.
An enemy hellbent on stopping it.
And one team tasked with the impossible.
In the wake of defeating Gornath of the Ontishog above the streets of Manhattan and saving Earth from a devastating plague, Wic and Phantom Team believe their work is done. But Major Insarka Kindesh has other plans for the heroes and invites them back to Karkin Four.

Phantom Team cross through New York’s origin ring to find the Blood Guard orchestrating covert operations against an Androchidan Empire in the throes of war. But galactic battle is not this trip’s focus. Instead, Insarka reveals plans for Wic’s elite team to help rescue millions of humans waylaid on a backwater planet.

When evidence of the plan falls into enemy hands, Phantom Team finds itself marooned in enemy territory with empire forces pitted against them. Moreover, the humans Wic was charged to save are in more jeopardy than ever.
Will Phantom Team find a way to return countless human refugees to Earth? And will Sir Charles avoid being tossed into a bucket of flounder? Or will Wic and his heroic team of operators finally meet their end at the hands of the cruelest aliens the universe has ever faced?