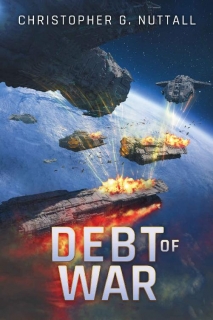 The Commonwealth Civil War has stalemated, but both sides—desperate to win at all costs—are looking for ways to end the fighting before everything they’ve built is turned to ash. King Hadrian, on the edge of madness, searches for allies who might help, at a price. His enemies, all too aware the battle is far from won, search for long-forgotten truths that might tear the king’s forces apart and end the war in a single blow. For Admiral Kat Falcone and Commodore William McElney, caught on opposite sides, everything they’ve ever loved is at stake.

William knows a secret, a secret that may end the war if he and his friend Kat can work together long enough to use it. But powerful forces are arrayed against them, intent on fighting the war to the bitter end. One false move and they’ll both fall into fire…
…And hundreds of planets will burn with them.