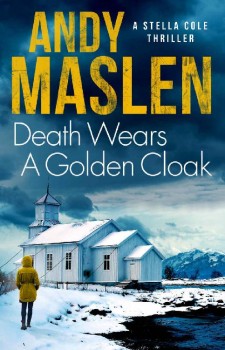 A serial killer stalks a snowbound Swedish town. And he’s got marriage in mind.
The priest in a snow-blanketed Swedish town opens her church and discovers a dead woman on the altar. The corpse is dressed in a wedding gown and clutches a fresh bunch of cornflowers. Fatima Engquist has no signs of violence on her body and the local cops soon call the Stockholm murder squad. Kriminalinspektör Stella Cole lands the case.

Once a rising star at Scotland Yard, Stella calls Sweden home now. She was blackmailed into leaving Britain by an ambitious Home Secretary who knows all about her dark past and is exploiting Stella’s guilty secrets for her own ends.
On the case with Stella are detectives Johanna Carlsson and Oskar Norgrim. As they investigate Fatima Engquist’s murder, another dead woman is found on the same church altar. Also wearing her wedding dress. Also holding a posy of out-of-season cornflowers.
With pressure from her boss and the Swedish media to produce an early result before any more dead brides turn up, Stella Cole needs to be at her sharpest to catch a serial killer who doesn’t even believe he’s evil.