Death In The Closet by Peter Boon 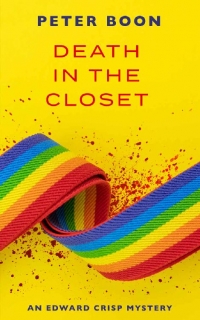 It should be safe to come out of the closet. For one man it isn’t.
Kieron Juniper is one of the most promising young footballers in England. Quickly leading his football club, Beachy Head United, to incredible Premiership success, he has become a local and national hero.
But he has a secret. One that will make history. He is about to come out and become the first openly gay Premier League footballer.

Until he is murdered by someone who doesn’t want that to happen.
Murder mystery enthusiast, Edward Crisp, and his loveable teenage sidekick, Noah, face their toughest case yet.
Can they navigate a world of WAGs, drag queens and misbehaving millionaires to solve the DEATH IN THE CLOSET?
And can YOU?