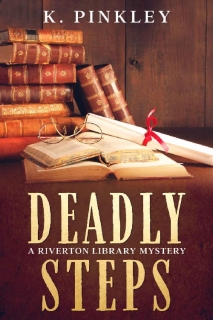 September, 1945
What do you do when what you’ve previously only imagined unfolds right in front of you?
With World War II over, librarian and aspiring mystery author Pauline Jameson is stunned to discover a dead body on the library steps on her second day on the job. If she’d had her druthers, she’d have skipped the library and concentrated on her writing. And if it were up to her parents, she would have skipped the writing and the library and pursued a more traditional path, like marriage. But Pauline is a thoroughly modern woman, and when a murder victim lands on the library steps, she’ll try her hand at solving the crime.

Henry, her new friend and co-worker, comes along to ensure her safety, while the other librarians put in their two-cents worth. The two soon discover swing dancing is a hobby they have common. Will Pauline and Henry become more than co-workers? Or will it be all business between the two of them?
And then there’s the issue of the victim. Was he really as kind and innocent as some portray him, or did he have secrets he would rather not have gotten out? Can Pauline catch a killer, or will she put her life at risk in the pursuit of justice? The truth lies within all of us, including the dead.