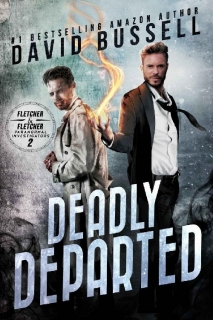 If you only read one book about a ghost detective solving crimes with his own zombified cadaver this year, make it this one.
Jake and Frank are two halves of the same soul: one a phantasm, the other a walking corpse. Jake is the light touch, while Frank is the sledgehammer. Together, they put the P.I. in R.I.P.

The Fletcher boys help restless spirits escape the earthly plane by bringing their killers to justice, but they’re not in it for the money. They do what they do to work off the sins of a misspent youth and buy their way into Heaven.

But for this case to pay out, they’re going to have to determine what the ghost of a murdered prostitute has to do with a clan of highly tenacious vampires, a supernaturally-enhanced assassin, and a street drug made of mashed-up fairy brains.
Oh, and they need to do all that before their phantom client loses her grip on reality and transforms into a wailing, horror movie banshee. Because if they don’t, the drawbridge to the promised land might just slam shut forever.