Dead of Night by Blake Banner 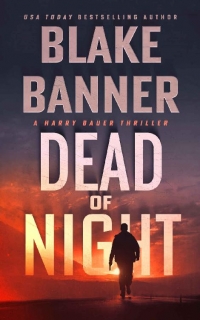 But you’re not like everybody else.
After eight years as a trooper in the SAS, fighting the secret, untold wars in the deserts and the jungles of the world, Harry Bauer has been kicked out for attempting to assassinate Mohammed Ben Amini, the Butcher of Al-Landy. He’s been sent home, to New York, where he was raised an orphan ‘til he was old enough to split and join the special forces.

Now he’s back, and unemployed; until Russian Mafia boss Peter Rusanov offers him a job wiping out the Albanian Mafia. It’s a job he figures could make him rich, until Colonel Jane Harris shows up, takes him for a ride to Pleasantville, and tells him about Cobra…
Then all hell breaks loose.