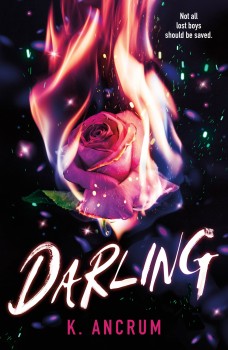 A teen girl finds herself lost on a dangerous adventure in this YA thriller by the acclaimed author of The Wicker King and The Weight of the Stars—reimagining Peter Pan for today’s world.

On Wendy Darling’s first night in Chicago, a boy called Peter appears at her window. He’s dizzying, captivating, beautiful—so she agrees to join him for a night on the town.

Wendy thinks they’re heading to a party, but instead they’re soon running in the city’s underground. She makes friends—a punk girl named Tinkerbelle and the lost boys Peter watches over. And she makes enemies—the terrifying Detective Hook, and maybe Peter himself, as his sinister secrets start coming to light. Can Wendy find the courage to survive this night—and make sure everyone else does, too?

Acclaimed author K. Ancrum has re-envisioned Peter Pan with a central twist that will send all your previous memories of J. M. Barrie’s classic permanently off to Neverland.