Darkness Beyond by Marjorie Eccles 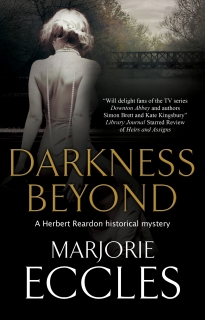 DI Herbert Reardon investigates the curious case of a man seemingly returned from the dead.

February, 1933. When their eldest brother Paul walks into their hallway, fourteen years after he was presumed dead, successful property developers Thea and Teddy Millar are beset with questions. Where has he been? Why has he never written to let them know he was alive? And most of important of all: what happened to Paul, after the end of the Great War, to make him abandon everything and everyone he ever knew?

When Paul’s body is found floating in the canal two weeks later, Detective Inspector Herbert Reardon feels sure the murder is connected to his new life in London. For who would want to kill a man who’s been thought dead for over a decade?

But Reardon knows the past can cast long shadows, and as he investigates, he finds a knot of dark secrets and old grudges that someone is determined he’ll never untangle . . .