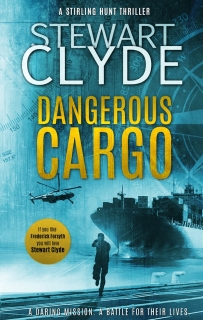 A daring mission. A fight for their lives.

Three months after the attack on the Twin Towers.
Two days before Christmas 2001.
One of Osama bin Laden’s ‘Phantom Fleet’ is in the English Channel.

Without any family of his own, Stirling Hunt is alone over Christmas, and the only one in camp when the emergency call comes through from Joint Forces Command. With half the Regiment away hunting Bin Laden in the sand and heat of Afghanistan, and the other half on leave, it’s a race against the clock to save the country from a terror attack over the holidays. An emergency meeting is called while a surveillance aircraft tracks the MV Nisha off the French coast. A ship with a deadly cargo and carrying the destructive power equivalent to an eight kiloton nuclear bomb will be in London in less than 24-hours.

Only one group of soldiers capable of pulling off the assault and stopping the attack. Their motto is ‘By Strength and Guile’.

Captain Stirling Hunt is an integral part of the assault team directed by the Prime Minister of the United Kingdom to carry out a daring nighttime raid on the terrorist ship. Will he and the other counter-terrorist specialists of the Special Boat Service pull of the first – and only – direct action assault in the history of the UK Special Forces, and save a city of twelve million people?