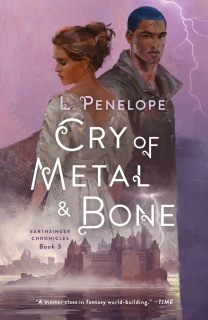 Six weeks after the fall of the Mantle, centuries-old enemies Elsira and Lagrimar struggle to unite. The will of the goddess is that the two nations become one, but while the war may be over, peace is still elusive. As desperate Lagrimari flee their barren land for a chance at a better life in Elsira, a dangerous faction opposed to the unification rises.

When a shadowy group with ties to the Elsiran government takes responsibility for the attack and promises more, an unlikely crew is assembled to investigate. Among them are Lizvette Nirall, a disgraced socialite seeking redemption for past mistakes, and Tai Summerhawk, a foreign smuggler determined to keep a promise he made to a dead man. Powerful Earthsinger Darvyn ol-Tahlyro is sent with a secret assignment, one that Queen Jasminda can’t know about. And in a prison far away, Kyara ul-Lagrimar searches for a way to escape her captors and save a family long thought dead.

It’s a race against time in this world of deadly magic, secret agendas and court intrigue to discover those responsible for the bombing before the next attack. And in another land a new enemy awakens—one that will strike terror into the hearts of gods and men.