Cries from the Cold by Bernadette Calonego 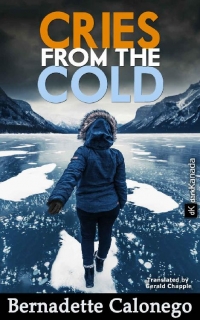 Detective Calista Gates’s career is almost dead. Until she gets one more chance on the wild Labrador coast, where evil washes ashore. A harrowing discovery on an icy beach—a crate with the remains of a young woman who disappeared three years earlier. The gruesome find sets the tiny, isolated town of Port Brendan on edge. A cryptic symbol burned into the crate gives RCMP Sergeant Calista Gates the first clue. The young investigator is desperate to prove she’s fully fit for service after an attack in Vancouver left her with a devastating brain injury.

She must hunt down the woman’s killer at all costs—and confront what is threatening her: the hostile climate, the insular community, the dangerous pack ice, and a cold-blooded assassin.
When a second murder shocks the village, Calista has a chilling suspicion. Her boss and some colleagues don’t believe her. Can she even trust her taciturn teammate? In the brutal Labrador winter, Calista has nowhere to turn. She has to fight for her job, for justice—and for her life.