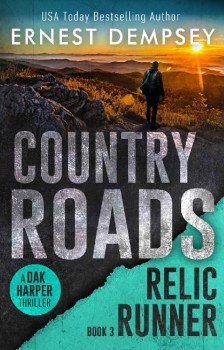 Trouble is brewing in the mountains of North Carolina.
After scouring the world for rare stolen artifacts, former commando turned treasure hunter Dak Harper is looking forward to a little time back in the States.
His boss, an eccentric young millionaire with a passion for antiquities, has sent him to North Carolina to retrieve a set of Civil War pistols stolen from a museum. The legendary Samuel Colt made the guns for President Abraham Lincoln, but some local bigwig has purloined them for himself.

As he tracks his quarry, Dak learns this Southern tycoon’s interests stretch much further than stolen weapons. Turns out he’s holding an entire town hostage at the center of a sprawling crime syndicate. And innocent townsfolk are dying.
Armed with few weapons of his own, Dak must somehow fight through a county full of crooked cops and deadly mercenaries to erase a tyrant whose greed is matched only by his cruelty.
Only then can he find the guns, rescue the town, and maybe save himself.