Constant Nobody by Michelle Butler Hallett 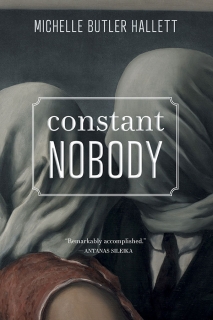 For fans of Hilary Mantel’s The Mirror and the Light comes an historical espionage novel with a contemporary edge from Michelle Butler Hallett.
The time is 1937. The place: the Basque Country, embroiled in the Spanish Civil War. Polyglot and British intelligence agent Temerity West encounters Kostya Nikto, a Soviet secret police agent. Kostya has been dispatched to assassinate a doctor as part of the suppression of a rogue communist faction. When Kostya finds his victim in the company of Temerity, she expects Kostya to execute her — instead, he spares her.

Several weeks later, Temerity is reassigned to Moscow. When she is arrested by the secret police, she once again encounters Kostya. His judgement impaired by pain, morphine, and alcohol, he extricates her from a dangerous situation and takes her to his flat. In the morning, they both awaken to the realities of what Kostya has done. Although Kostya wants to keep Temerity safe, the cost will be high. And Temerity must decide where her loyalties lie.
Writing about violence with an unusual grace, Michelle Butler Hallett tells a story of complicity, love, tyranny, and identity. Constant Nobody is a thrilling novel that asks how far an individual will go to protect another — whether out of love or fear.