Cold as Hell by Lilja Sigurdardóttir 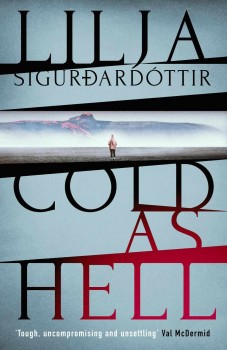 Arora returns to Iceland when her estranged sister goes missing, and her search leads to places she could never have imagined.

A chilling, tense thriller – first in a gripping series – from one of Iceland’s bestselling authors.

Icelandic sisters Arora and Isafold live in different countries and aren‘t on speaking terms, but when their mother loses contact with Isafold, Arora reluctantly returns to Iceland to find her sister.
But she soon realizes that her sister isn’t avoiding her . . . . . she has disappeared, without trace.
As she confronts Isafold’s abusive, drug-dealing boyfriend Bjorn, and begins to probe her sister’s reclusive neighbours – who have their own reasons for staying out of sight – Arora is led into an ever-darker web of intrigue and manipulation.
Baffled by the conflicting details of her sister’s life, and blinded by the shiveringly bright midnight sun of the Icelandic summer, Arora enlists the help of police officer Daníel, as she tries to track her sister’s movements, and begins to tail Bjorn – but she isn’t the only one watching . . . .

Slick, tense, atmospheric and superbly plotted, Cold as Hell marks the start of a riveting, addictive new series from one of Iceland’s bestselling crime writers.