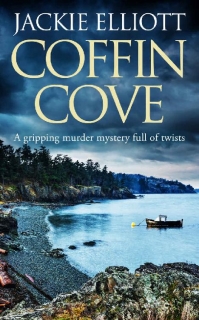 Andrea “Andi” Silvers needs a fresh start. Once a star reporter, she’s been dumped by her lover and by the paper they both worked at.
Andi moves to the tiny fishing village of Coffin Cove, on the Vancouver coast, where she lands a job at the local Gazette. Expecting bake sales and unpaid parking tickets to be the biggest news items, she quickly discovers the small town holds dark secrets.

Two sea lions wash up on the shore. They’ve been shot dead. Activists point the finger at local fishermen. Then things get far worse . . .
A dead body turns up.
How does it all relate to a fifteen-year-old girl’s tragic death twenty years ago? The girl was found drowned with her arms and legs tied together.
The deeper Andi digs, the more dirt she finds.