Club You to Death by Anuja Chauhan 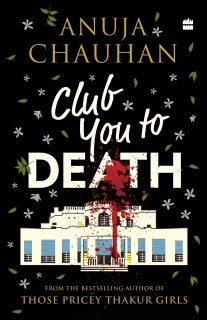 When a hunky personal trainer is found dead at the posh Delhi Turf Club, on the eve of the club elections, it is first thought to be a freak accident. But later his protein shake is revealed to have been laced with a lethal dose of a popular party drug.

Looks like one of the club members is a cold-blooded killer. As the capital bristles with speculation and conspiracy theories, Crime Branch veteran ACP Bhavani Singh is appointed to investigate the case.

Together with his able deputies — ex-lovers Akash ‘Kashi’ Dogra and Bambi Todi — ACP Bhavani sets out to solve a crime that seems simple enough at the surface, but turns out to have roots as deep and spreading as those of New Delhi’s famous neem trees…

Club You to Death is a heady mix of spine-chilling suspense, Anuja Chauhan’s patented laugh-out-loud humour and toe-tingling romance.