City of Whispers by Katt Powers 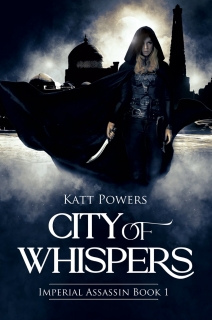 A disgraced assassin. A sinister plot. Will her one shot at redemption send her to the grave?
Dhani Karim is furious. Wrongfully expelled from the Imperial Assassins, the snarky killer is forced into a lowly unranked position in a remote desert colony, working with a guy who’s clearly damaged goods. And when they barely survive an attack on what should have been a routine assignment, she fears clearing her name could cost her life.

Struggling to navigate a land where she’s the only person who can’t wield magic, things get worse when she receives a death threat and her unwanted partner vanishes. But when the clues lead to a violent cult, Dhani finds herself in a race against time to stop a bloodbath that will consume thousands of innocent lives.
Can she expose a deadly conspiracy before it causes a massacre?