City of the Dead by Vasily Mahanenko 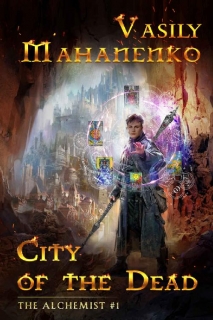 There are whole anthologies of stories out there about what humankind does when a game enters their world. But what about when they’re living in one where a game arrived thousands of years before? What if they’re the survivors of a bloody struggle, having fought for and earned their place on the planet?

Tailyn Vlashich was a young nobody far away from all those grander issues. All he cared about was one thing: making his way through a harsh world where the emperor, evil foes, and an impartial god held sway. And the god, of course, demanded nothing less than that all things were done in accordance with its divine will.