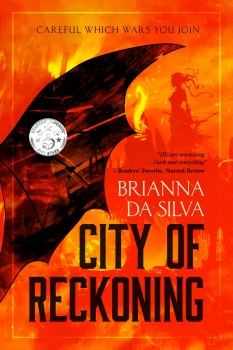 Kindy Sharro is used to hiding. As a Nocturan, her bat wings, claws, and night vision place her under constant threat of hunters, who cruelly slaughter her kind for sport.

But everything changes the day of the invasion. The Dorish Empire drafts the Nocturans it once persecuted to help defend against a godlike foe. Kindy enters the war, but she has an ulterior motive: Use the war to destroy her arch enemy, Charris Pouden, before he gains enough power to destroy her first.

Meanwhile, Lasía Mae’olo, an elite wolf-accompanied warrior, plots rebellion against the Dorish Empire. When she is drafted to fight for her enemies, she must find a way to subvert the war for her own purposes.

But suspicion and distrust haunts her every move. This war has many sides—and she’s not sure which side she’s on anymore.

The bonds of friendship will be tested. Alliances will be questioned. In a story of political intrigue, ethics of war, and young love, one question must be answered: Which side will you join?