City of Prey by Blake Pierce 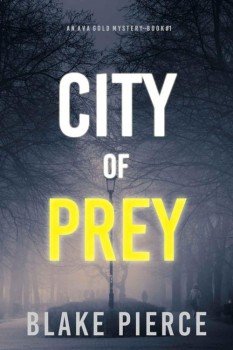 In the rough streets of 1920s New York City, 34 year-old Ava Gold, a widower and single mom, claws her way up to become the first female homicide detective in her NYPD precinct. She is as tough as they come, and willing to hold her own in a man’s world.

But when a psychotic serial killer unleashes a rampage, murdering young women across the city, Ava will have to search the dark canals of the twisted killer’s mind if she has any hope of hunting him down. With psychological profiling still in its infancy, and mocked by most, Ava will be even more alone as she follows her instinct, and hunts him down in a dangerous game of cat and mouse.

Just when it seems the stakes couldn’t be higher, Ava comes to an awful realization: she herself may be the next target.

Amidst the speakeasies, jazz clubs, mafia-run prohibition rings, horrific mental asylums and dangerous back alleys of the city, can Ava achieve what all the men cannot: enter the sick mind of a killer, and stop him before more women die?