Chronicles of the Black Gate Omnibus by Phil Tucker 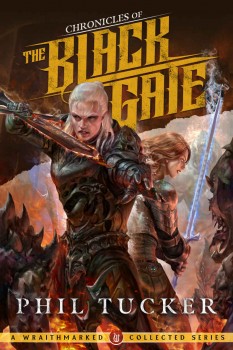 With a forbidden power, Asho is going to save the very empire that enslaved him.
A war fueled by a demonic heresy is about to engulf the Ascendant Empire. Agerastian raiders, armed with black fire and an ancient hatred, seek to sever the ancient portals that unite the realm.

And in so doing, destroy it.

Asho—a squire still scarred by the shackles of his past—sees his new liege and her meager forces banished to an infamous ruin. Beset by tragedy, betrayal, demons, and an approaching army, the fate of the exiles hangs by the slenderest of threads.
Unbeknownst to them, their salvation lies not in their steel and resolve, but in the scarred soul of a former slave–a brutal secret that could reverse their fortunes and reveal the truth behind the war that wracks the Empire.

Includes:
The Path of Flames
The Black Shriving
The Siege of Abythos
The Iron Circlet
The White Song