Chimes at Midnight by Michael A. Black 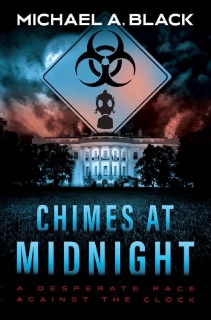 Years ago police detective Kevin McClain was captured and tortured when he was an airborne ranger in Somalia. Now, years later, the mutilation murder of a homeless man brings back a flood of unpleasant memories. At the same time, FBI agent Felicia Knight is busy tracking down a terrorist cell purportedly set to strike in our nation’s capital on the eve of the presidential election.

What neither McClain nor Knight realizes is the two cases are secretly connected by a sinister plot more diabolical and far reaching than either of them can imagine. As their investigations coalesce, they find themselves in a desperate race against the clock to try and prevent our nation’s capital from being engulfed in a cloud of death and destruction.