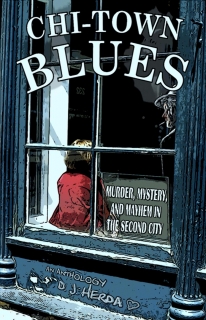 When master storyteller D. J. Herda left Chicago, he took forty years of memories with him. Now he has unleashed them all in their wild-and-wooly, sexually charged, hit-and-hit-harder glory. Whimsical, haunting, riveting, and erotically packed, these are the stories of life in the Windy City. All the cops, dicks, cons, dames, skirts, and criminals a body could ever hope to meet. Or maybe not! You’ll lose yourself in these hauntingly vivid tales that run the gamut from Crime and Punishment to Humor, Pathos, Spirituality, and Coming-of-Age. All here in Chi-Town Blues.

Among the stories unfolding within this book:

Double Jeopardy – A story of life, love, and lethargy at play when a con sets out to run a grift and nearly gets taken for the ride of his life, instead.

Fisher of Men – A curious mix of a young man, his favorite uncle, and their fishing trip to Lake Michigan … and murder’s doorstep.

Greatness – How a drunk and a loser can redeem himself in the eyes of a young boy and, later, a grown man obsessed with solving the riddle of an old man’s tarnished life.

The Tenants – When a landlady turns her eye toward ridding the world of the losers, derelicts, and scumbags of society, she begins by cleaning up her own rental building on Chicago’s wild Near North Side.

The Union – Caught by the beauty of a dumb blonde who turns out to be anything but, a man skates on thin ice not knowing how his tryst will end.

Trapped! – Beauty and brains collide in a costly business venture overrun by mobsters and criminals-all intent on taking from society far more than they give.

Moving faster than an Illinois Prairie wildfire, these tales of torturous ambiguity are sure to enlighten, educate, amuse, astound, fascinate, and facilitate all readers everywhere to understand a little more fully about what it means to be second best-second in size, second in stature, second in cities everywhere across America. Like its namesake comedy club, its characters are the John Belushis, Dan Akroyds, Laraine Newmans, and Gilda Radners of today’s literary world. What Saturday Night Live did for Second City the nightclub, Chi-Town Blues does for literature, bringing a newfound awareness to America’s enduring city by the shore.

From the wealth of the Near North Side and the allure and magic of Rush Street to the working-class neighborhoods of the West Side and the college hangouts at the University of Illinois, this book is a cross-section of a city and its people, their lives and livelihoods. It’s a look at what makes Chicago and Chicagoans tick. It’s everything you ever wanted to know about the criminal element of big-city life in a closeup look filled with surprises around every aging brownstone and spiraling high rise.