Chase The Devil by Andrew Lowe 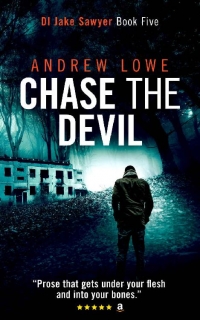 A missing teenager, left for dead.
A sadistic killer obsessed with pain.
A detective staring into the abyss.
—–
DI Jake Sawyer is in limbo. Facing an internal enquiry into his capture of a vicious killer, he turns private detective, and takes the seemingly hopeless case of a teenage boy, missing for seven years.
When a young woman podcaster investigating the boy’s disappearance also goes missing, Sawyer is drawn into the secretive world of the urban exploration community.

But then an adult male body is found, showing signs of extreme torture, and the method reminds Sawyer of an unsolved case from his early career. He connects the past with the present, uncovering a terrible truth which could hold the key to the disappearances.
Out of therapy and tormented by trauma, Sawyer must hold himself together as his quest to find the missing boy and woman leads him to the lair of his most terrifying adversary.