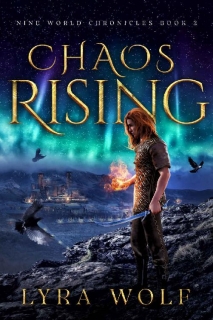 Let’s start Ragnarok, they said. It’ll be fun, they said.
Nothing pisses off a trickster god more than being imprisoned for five hundred years and not being able to annoy Thor. There are other reasons, secrets, and promises behind Loki’s rage, but that’s for Loki to know and the gods to find out—preferably painfully.

When the chance to start Ragnarok presents itself, Loki feels the apocalypse is as good a way as any to burn Asgard to the ground. And, it is, until the gods reveal their own teensy, tiny little surprise for Loki.
Suddenly, Loki has every reason in the worlds to stop them from ending. But this is Ragnarok, and one does not simply stop the apocalypse.

Chaos is all well and good, so long as Loki is in charge of it. Except chaos isn’t about to start taking orders from anyone, not even the god of pot-stirring himself, and it has a universe to destroy…