Caught in the Web by Emmy Ellis 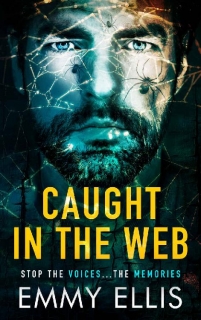 Finding a killer isn’t easy, but someone’s got to do it…
Detective Burgess Varley is called out to view a dead body. It isn’t one of the best things about his job—but putting killers away for the rest of their lives is. Problem is, the victim has something in her mouth that has always scared Burgess—something that links him to the killer without him even knowing it. And that link is more than Burgess might be able to handle.

With Burgess and the killer learning things about themselves, their lives, and each other that they previously hadn’t known, life—and death—is about to become serious.

Two men, joined together by one man’s actions in a past so murky, the truth is bound to come out. Can Burgess accept that even though killers are bad, they are also human, too?