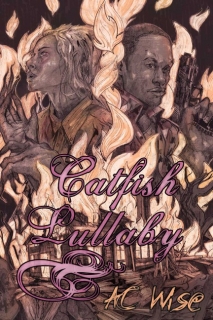 Small town secrets lead to trouble for everyone as Caleb must confront the demons of his past in this Southern Gothic queer cosmic horror, a tale of weird magic and monsters on the bayou.

LEWIS IS A TOWN OF SECRETS
The Royce family has been a plague on the small, Southern town of Lewis for generations. Caleb has heard rumors about the family his whole life, just like he’s heard the rumors about a monstrous creature known as Catfish John living in the swamp.

When the Royce house burns down, Caleb’s father-Lewis’s sheriff-takes in the sole survivor, a young girl named Cere. Caleb quickly learns the truth about Archie Royce and the terrible fate he had planned for his daughter. After a woman is brutally murdered, Cere begins to suspect that not all of her family perished in the fire, and she and Caleb set out to stop her father’s dark vision from coming to pass.

Years later, Caleb is the sheriff of Lewis, and the monsters of his childhood return. Now Caleb must fight to protect those he loves from Archie Royce’s legacy, and his best hope may be a legend he’s almost managed to convince himself never existed-Catfish John.