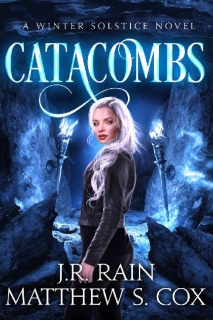 Solstice Winters never expected her job as photojournalist would involve stopping a death god.
She’s only ever wanted the same things as anyone else—a nice career, safe place to call home, and no magical assassins trying to kill her. Alas, there’s nothing like an unexpected dimensional misalignment to ruin plans. The rapid flood of magic into the world changed her from simple reporter to secret agent in mere months. It also revealed the truth of her being an elf.

Oh, and her cat talks.

Her investigation into who wants her dead stalls when a paranormal entity shows up in her apartment pleading for help. A crazed cult leader halfway across the world has enslaved his people, forcing them to help set an ancient evil loose.
Death gods are a bit too much for the police—or Solstice—to handle. If she can’t stop the summoning, she’ll have much bigger problems than assassins… for the minute or so the world has left to exist.