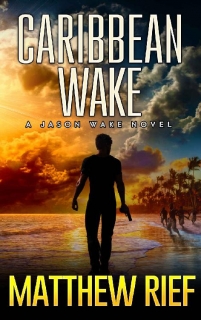 Heir to a billion-dollar fortune, and with two Ivy League degrees under his belt, Jason Wake had the world at his fingertips . . . and then tragedy struck.

On a cold winter morning, the promising young man could only watch as his fiancée was killed in a brutal act of terror that left fifty-seven dead. Fueled by burning passion and an incessant desire for retribution, Jason puts himself through hell at a grueling covert training facility to become one of the deadliest men on Earth.

When the ruthless terrorist group seeks innocent blood once more, the resolved American stands fearlessly in their way with one all-consuming objective: send the mass murderers to their maker, or die trying.

Caribbean Wake is a brand-new, high-octane, action-packed adventure thriller from the author of the Florida Keys Adventure Series. Buckle your seat belts. Jason Wake is on the loose.