Care For Me by Farah Cook 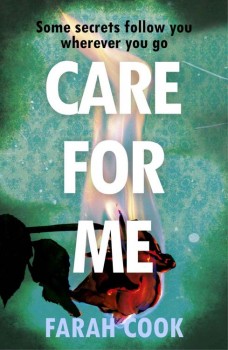 When Amira takes her mother Afrah to Ravenswood Lodge Care Home, she thinks they will both be safe. But the past is just around the corner . . .

Amira is struggling to look after her mother, Afrah. So when they arrive at Ravenswood Lodge Care Home, beautiful and imposing against the background of the Scottish Highlands, she hopes it is the right decision for them both.
But soon Afrah insists her belongings are being stolen, her photographs, her jewellery, her pill boxes, Amira and the staff are convinced it’s just Afrah’s imagination, it’s just her memory.

But Afrah knows Ravenswood Lodge isn’t a safe place. Could it have something to do with the past? She remembers newspaper clippings, hazy images of a fire years ago, a memory she’s spent years forgetting and now she just wants to remember.
Someone wants her gone. But first, she needs to convince Amira of the truth.