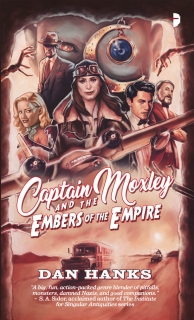 In post-war 1952, the good guys are supposed to have won. But not everything is as it seems when ex-Spitfire pilot Captain Samantha Moxley is dragged into a fight against the shadowy US government agency she used to work for. Now, with former Nazis and otherworldly monsters on her trail, Captain Moxley is forced into protecting her archaeologist sister in a race to retrieve two ancient keys that will unlock the secrets of a long-lost empire – to ensure a civilisation-destroying weapon doesn’t fall into the wrong hands. But what will she have to sacrifice to save the world?

A Pale Light in the Black by K.B. Wagers