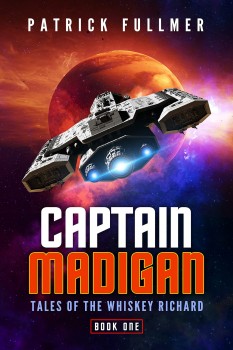 Smuggling, fighting, killing – the life of a space privateer is a young man’s game. Albert Madigan, captain of the Whiskey Richard, sure as hell knows that description no longer applies to him.

Madigan’s ship is rundown, his crew is made up of men and women just as flawed as their captain and bouncing from shady job to shady job across the solar system is more trouble than it’s worth. Madigan finally has his opportunity to retire when a high paying contract falls in his lap, but his best laid plans are shot to shit when the job turns out to be a deadly setup.

Taking off across the stars, the crew of the Whiskey Richard fights to stay one step ahead of their pursuers as Madigan comes to grips with what he needs to do to see his quest for vengeance through to its inevitable, bloody conclusion.