Call Me Mummy by Tina Baker 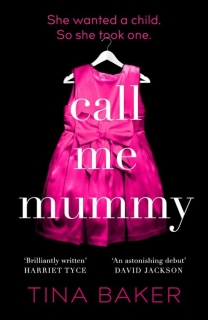 THIS MOTHER’S DAY YOU WILL CALL HER MUMMY

Glamorous, beautiful Mummy has everything a woman could want. Except for a daughter of her very own. So when she sees Kim – heavily pregnant, glued to her phone and ignoring her eldest child in a busy shop – she does what anyone would do. She takes her. But foul-mouthed little Tonya is not the daughter that Mummy was hoping for.
As Tonya fiercely resists Mummy’s attempts to make her into the perfect child, Kim is demonised by the media as a ‘scummy mummy’, who deserves to have her other children taken too. Haunted by memories of her own childhood and refusing to play by the media’s rules, Kim begins to spiral, turning on those who love her.
Though they are worlds apart, Mummy and Kim have more in common than they could possibly imagine. But it is five-year-old Tonya who is caught in the middle…

CALL ME MUMMY. IT’LL BE BETTER IF YOU DO.