Burying the Crown by TP Fielden 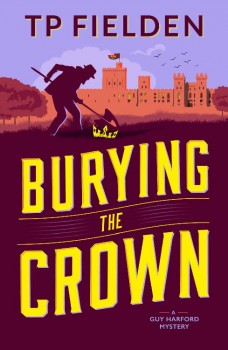 Even as war rages, there are deep secrets lurking in the heart of Buckingham Palace…
Windsor, 1942. War rages through Great Britain. Anna Duckworth, former lover of Prince George, Duke of Kent, is found dead after an enemy bomb blast at her country home. When courtier Guy Harford is called to dispose of incriminating love letters between Anna and the Duke, it becomes clear that there’s more to the story than anyone is prepared to reveal.

As the court begins to whisper of a lone gunshot heard in the house that day, another gruesome death befalls the royal circle. With the bodies stacking up, Guy rejoins his old accomplices, East End burglar Rodie Carr and undercover agent Rupert Hardacre, to unmask the dangerous secrets lurking beneath the glittering Crown.

But with tensions rippling from London to Tangier as the Allied Forces prepare to invade North Africa, and Guy’s reputation in the Palace hanging in the balance, can he solve the mystery before more heads roll?