Burn this City by Brenda Poppy 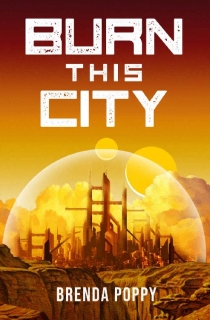 Kasis is an uninhabitable planet, yet there they were – inhabiting. It’s no wonder that prolonged colonization produced…side effects. Or gifts. But with a militarized government that persecutes people for being different, using such a gift could mean certain death.

Auburn Alendra is one of the gifted. Her power allows her to hear into the deepest corners of the polluted city, gathering secrets and using them to her advantage. When one of those secrets threatens her very existence – along with thousands of others throughout the city – Auburn must do everything it takes to fight back.

Along with a resistance force known as the Lunaria, “Burn” races against the clock to infiltrate the government’s Peace Force in search of answers and discover a way to avoid all-out warfare. Join Burn on a thrilling adventure as she navigates the perils of a scarred dystopian landscape and discovers the true cost of survival.