Brother, Can You Spare a Crime? by Sheri Cobb South 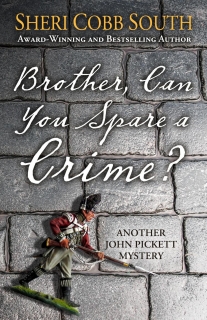 When one of his colleagues witnesses a robbery in which one of the participants, a child, bears a striking resemblance to a certain Bow Street Runner, John Pickett realizes he has a young half-brother who has been apprenticed to a criminal gang. The brutal murder of the pursuing constable makes the crime far more serious than a simple robbery would be-and ten-year-old Kit is linked to the crime by the toy soldier he dropped while fleeing the scene.

Pickett’s investigation will take him back to the rookeries of London where his own childhood was spent. But can he return to his old haunts without being pulled back into his old way of life?