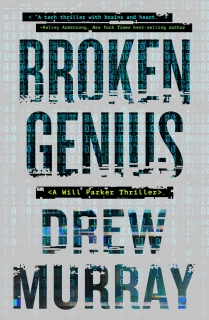 In 2011, Will Parker, the young prodigy CEO of a big tech company, makes a coding mistake that costs a college student her life. To assuage his guilt, Will pursues a career in the FBI Cyber Division. Now, Special Agent Will Parker is called to investigate a murder scene at a Comic Con event in the Midwest, where the victim has ties to a radioactive quantum computer that Will was working on before he left his gig as CEO. Working with smart local homicide detective Dana Lopez and FBI stuffed-shirt Thomas Decker, Will discovers the victim was holding an auction for the computer on the Dark Web—and the bidding is still live.

With bidders including a legendary Chinese hacker, Russian criminals sent by the Kremlin, and a corporate executive desperate to escape a scandal, Will once again finds a life in his hands when the victim’s daughter is taken hostage. A trail of blood and high-tech breadcrumbs leads Will deeper into mystery, danger, and a race against time to keep unlimited power out of the wrong hands.