Broken by Magic by Lindsay Buroker 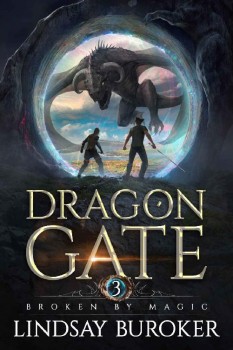 Even before our heroes discovered a portal to other realms, Jak Freedar wanted to seek out powerful allies to help overthrow the tyrannical wizard rulers of his home world. Instead, he chanced across a dragon egg and is now the surrogate father of a hatchling.

Since he found the egg, taking care of the young dragon is his responsibility. Even as King Uthari forces the team to prepare for another mission, Jak must do his best not only to care for the hatchling but to keep it safe from those who want to use it for their own gain.

As he soon learns, it’s not only the wizards of his own world who would love to control a dragon. It turns out that powerful enemies in other realms want a hatchling too. And they’re willing to kill for it.