Breath of Hell by Blake Banner 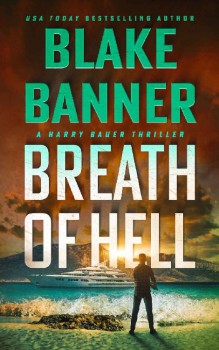 Harry Bauer is a killer. That’s his job, and after eight years in the British SAS, he’s good at it. One of the best.
He works for Cobra, a secret organization that takes out the world’s trash. They serve the so-called Five Eyes, but answer to nobody. Now, Cobra’s head of operations, Colonel Jane Harris, has been abducted, and Cobra Director, the brigadier, has told Harry to go find her.
Harry doesn’t need telling. She’s more than his employer. How much more he doesn’t know, but he does know he’s going to find her and bring her home, and whoever took her is going to pay. In blood.

His search takes him to Koufonisi, a small Greek Island in the Cyclades, to Charlotte’s House, a small boutique hotel on the beach, and to Russian billionaire Gabriel Yushbaev’s super yacht, anchored just off shore. What he finds there will be crueler than any knife wound he ever took. It will lead him on to Istanbul, and across the Black Sea to Divnomorskoye, to the heart of an evil empire that straddles the globe, and to the very gates of Hell…