Borne Rising: Beyond the Shadows by Matthew Callahan 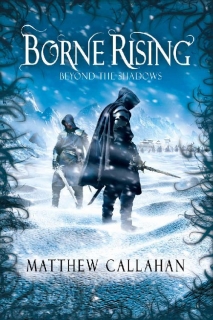 When the Borne rise, empires will fall…
After the harrowing events of the Shale Prison, Will Davis needs answers. Burned and stripped of the power he’d always known, his only hope comes in the form of the mad Lightborne, Jero din’Dael. Together they venture to the Sapholux, the sacred bastion of Radiance. For within the walls of an ancient fortress, din’Dael harbors his most closely-guarded secrets—secrets that could shake the very foundations of Aeril.

But there is something amiss in the lands of Aeril; the land is in flux. War is looming. The heavens hang shattered in the sky. And an old enemy has shown their face.

In order to overcome the battles ahead, Will knows that he must reunite with his brother. Only, Madigan is nowhere to be found. No one has seen nor heard from him. Only rumors—rumors linking his brother to an evil, manipulative Shadowborne—persist. Rumors of a Borne so dangerous, so twisted, that Madigan may not escape with his life.

Racing against time as powerful forces threaten to collide around him, Will must make a choice. Will he stand and fight? Or will he risk everything in an attempt to save his brother?