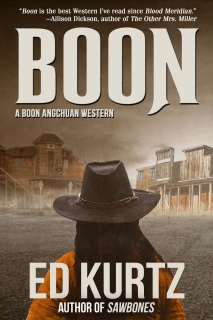 No man is Boon’s equal, no gun more lethal.

Boonsri Angchuan travels the trails, riding from town to town with her one and only friend, a portly Arkansan drunkard named Edward Splettstoesser. She has done nothing else for years, her only goal being revenge upon the one man who should have protected her but instead sold her and her mother into bondage.

From Texas to the New Mexico Territory, from the filthy backstreets of San Francisco’s notorious Barbary Coast to the ghost town of a depleted placer mine, Boon and Edward navigate corrupt lawmen, hostile Kiowa, a mad judge, and countless gunmen aiming for their heads in Boon’s dogged pursuit of answers—and vengeance.