Bones of Hilo by Eric Redman 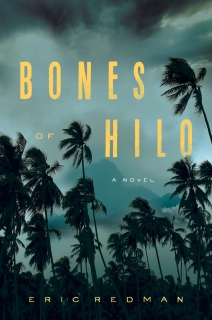 From Hawaii’s Big Island to the wilds of Washington’s North Cascades, a novice detective uncovers a hoard of ancient secrets at the heart of a grisly murder.

A young, inexperienced detective from the wet, working-class side of Hawaii’s Big Island, Kawika Wong faces an uphill battle to gain the respect of his more seasoned colleagues. And he has the chance of a lifetime when Ralph Fortunato, the Mainland developer of an unpopular resort on the island’s tourist side, is found murdered on a luxury golf course, an ancient Hawaiian spear driven through his heart.

With the other detectives desperately trying to solve another string of grisly killings, Captain Terry Tanaka has no choice but to send Kawika to investigate. As Kawika joins forces with his father and girlfriend to help read the signs and make sense of the ritualistic murder scene, they uncover a cache of secrets reaching far back to the Island’s ancient past. And the journalist who found the body has her own theories about Fortunato’s demise–but do they line up with the evidence?

On a perilous journey that stretches from the Big Island to Washington State and back, Kawika finds danger at every turn. But he still has much to learn about Hawaii, and about the rugged terrain of the North Cascades. And he’d better learn it fast, because his instincts may not be enough to catch a killer who’s closing in even faster.