Body on the Shore by Diane M Dickson 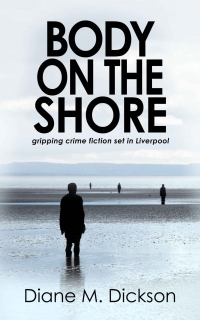 A nameless victim, an elusive killer, and a puzzling case for a detective in a new role
When a body washes up on Crosby Beach in Liverpool Bay, detectives quickly declare foul play. Yet they will struggle to establish the identity of the victim, let alone the killer.
Leading the inquiry on his first murder case, DI Jordan Carr must marshal a somewhat motley team to build a picture of what happened one grim day on the Mersey. Like footprints in the sand, in time the clues will disappear.

With a victim who has clearly concealed her own identity, it will require a journey into Liverpool’s underworld to shake loose the facts.

But once they have their man, the police still need to know why the woman was killed. And answering that question will be DI Carr’s biggest challenge.
BODY ON THE SHORE is the first book in a new mystery series by Diane Dickson. She is the author of many crime fiction titles, including the bestselling DI Tanya Miller series set in the Midlands and Oxfordshire.