Blood of the Raven by A.E. Rayne 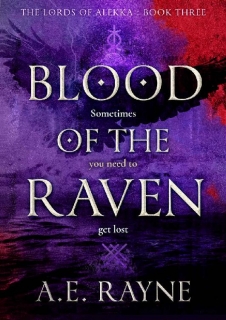 FATE will not be denied.
And those FATED TO RISE cannot remain in the shadows forever.
We head North!
It is ime to get lost in the land of the forgotten. Time to explore Alekka’s Northern realm in search of that which is missing…

Abandoned by the sun, shunned by the Father of the Gods himself, the North is a wild place; a brutally cold land, where ambitious lords keep their followers warm with tales of how they will be the one to claim the prized crown of Alekka. Stories woven on stormy nights, sung around blazing fires over cups of ale, tell of the one who will unite the two halves of the broken land. They whisper of the Bear Stone, where the prophecy of that man’s coming was etched two thousand years ago.